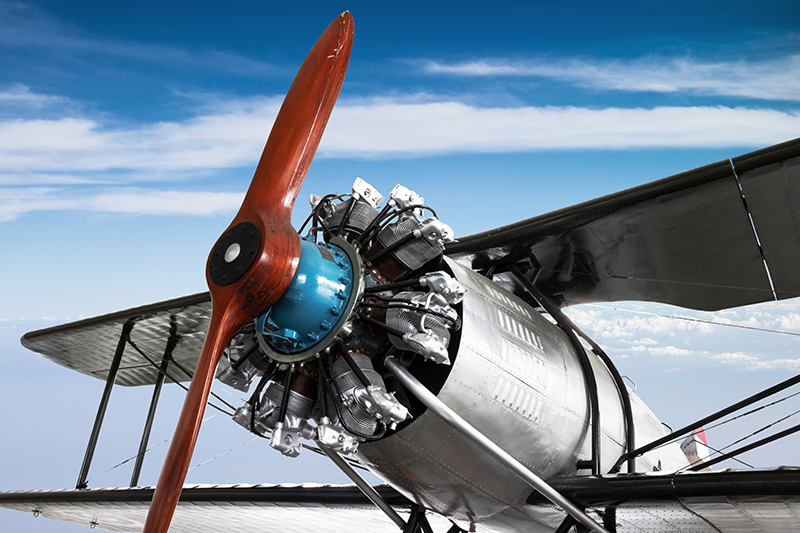 One of the most successful watch genres is the pilot's watch. Its popularity stems from its distinctive design, which in turn stems from its eventful history: when man rose into the air, timepieces became an indispensable instrument. By necessity, a new style of watch was developed - the original pilot's watch. STOWA was one of the very few pilot watch manufacturer who was permitted to build these iconic pieces. Characteristic of the original pilot watch is its signature design, which includes a case engraving of Fl 23883 opposite the crown and the simple but extremely legible typography on the dial. 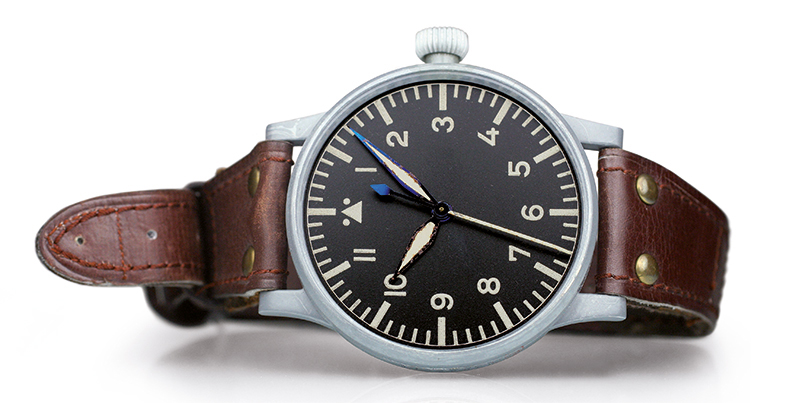 The pilot watch was an indispensable navigation companion on board any aircraft.

At the beginning of the 20th century, mad men in flying crates created plenty of excitement. Simultaneously, mobility became more and more important. Horse-drawn carriages were replaced by fueled vehicles, railroads began to connect urban centers, and in the air, pilots were flying with nerves of steel. At the time, aviation was particularly dangerous. Admittedly, the days of aircraft captains requiring the assistance of specialised watches are over. However, the design of the pilot watch is timeless and it is consistently rated among treasured favourites by watch collectors.

As one of the largest manufacturers of pilot watches, STOWA reissued its characteristic pilot watch in various designs in 1997. There is a watch for everyone in this range and we produce pilot watches with manual wind, automatic and chronograph movements. 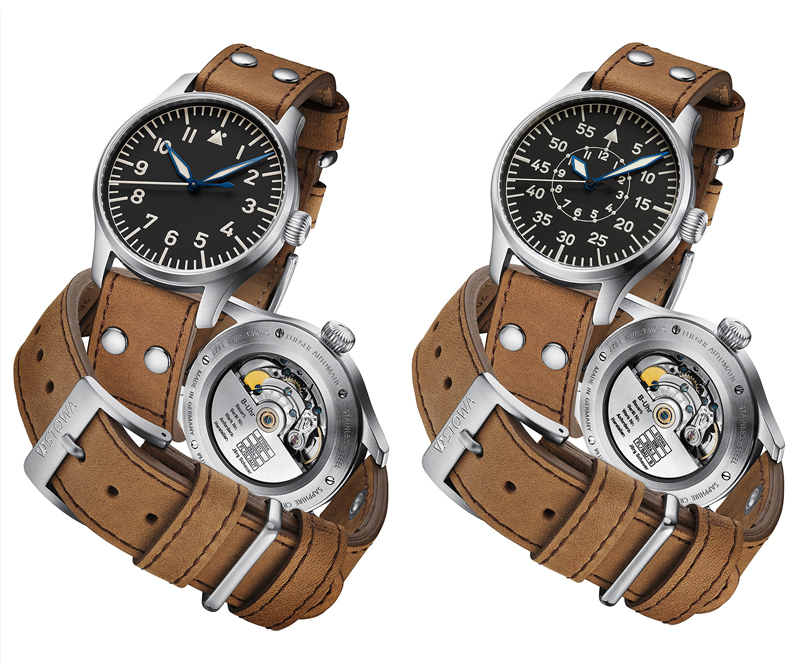 The mechanical pilot watch. Model A and Model B.

The original 1940 design of the Flieger watch by STOWA was marked by a typical arrangement of the arabic hour numbers on the dial. They called this version Baumuster A. Around 1942, the Baumuster B was developed. This dial is characterized by the large external minute-track numbers and the smaller inner hour numbers. The 55mm STOWA Baumuster B is one of the rarest large Flieger watches ever. There were probably only 42 pieces built. Both original STOWA Flieger watches can be viewed in the museum in Engelsbrand. The movement of the pilot watch was very precise and was purchased from Unitas (Caliber 2812). Today, we also use Unitas (Caliber 6498) movements in some of the watches in our pilot watch collection.

Relaunch of the STOWA pilot watches since 1997.

STOWA has been continuously building mechanical watches since 1927. In 1997, the signature mechanical pilot watch was re-released in the Type A version, and in 2010 the Type B version was added. In 2012, the STOWA pilot chronograph was added to the collection. 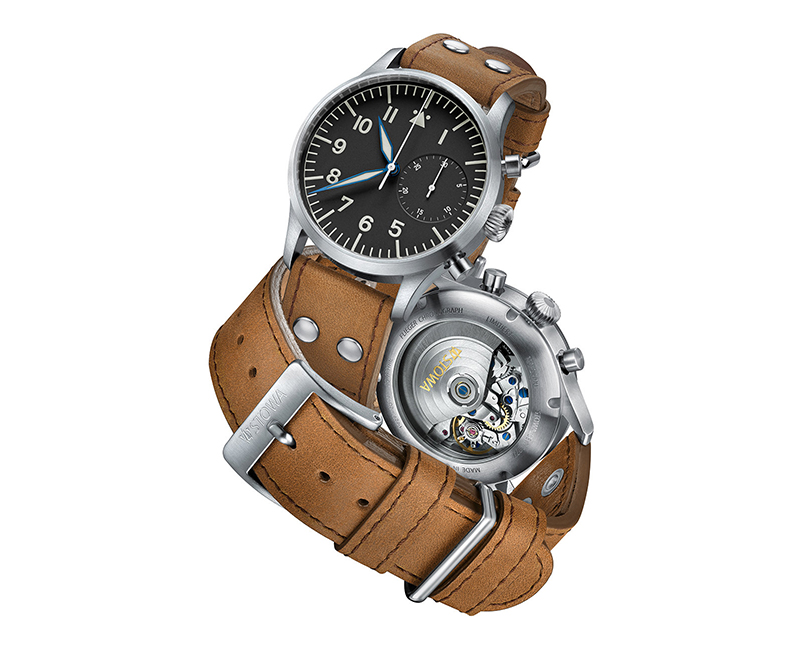 The typical design features for pilot’s watches are: luminous numerals on the dial, thermally blued steel hands with luminous material and a luminous triangle with two luminous dots. This makes pilot’s watches extremely easy to read - even at night.

While the Type A is the most well-known design for pilot watches, many watch enthusiasts have also discovered the Type B. The Flieger watch in Type B design is available as a normal 40 mm watch or as a "Flieger Classic Sport Baumuster B“ Variante.

For lovers of the classic hand wound movement, we have produced the "Flieger Classic 6498" in a 41 mm case. In this model we use the hand wound Unitas 6498 movement.

The "Flieger Classic Sport" is the sports version of our classic pilot watches. With a brand new 43 mm case and extra thick sapphire crystals, it offers an extra dose of robustness on the wrist. As with all STOWA watches, the intensity of the luminous material painted onto the hands and dial is particularly strong. The mechanical pilot watch also had luminous hands.

For fans of the pilot watch who can’t live without a stopwatch function, we built the „Flieger Classic Chrono“. The STOWA pilot watch chronograph deliberately comes without the permanent, small second hand. This enables the retention of the true mechanical pilot watch design. This creative innovation is loved by both watch collectors and the experts. In 2012 this special pilot watch won the "Goldene Unruh". It is also available as a hand wound pilot chronograph.

The „Flieger Verus 40“ is the latest interpretation of our classic pilot watches. The design is characterised above all by clarity and functionality. In 2019, the Verus pilot watch won the "Red Dot Design Award", one of the most prestigious design awards in the world. The Verus pilot watch is one of the contemporary pilot watch models of STOWA. More modern, but still respecting the DNA of the original pilot’s watches.

In order to guarantee the authenticity of pilot watches, the DIN 8330 pilot watch standard was created in 2016. STOWA was one of the leading companies working on the new DIN. The result is a set of standards for the construction of new, more modern pilot watches that still have to withstand a number of intense, time-consuming tests. For STOWA, it was proof of the technical performance of their internal manufacturing capability.

STOWA has various movements to choose from for its pilot watch. Many collectors love the classic hand wound pilot watch. The daily ritual of winding the watch is very important for these individuals. The somewhat simpler automatic variant – especially if you wear the watch daily, is another version of the classic pilot watch. However, both movements are of top quality. The automatic pilot watch is approx. 1 mm higher and the movement can be viewed under the sapphire crystal case back, just like the hand wound movement.

All STOWA pilot watches exhibit the passion and attention to detail that characterises our manufacturing process. With hard work, professional competence and a touch of adventure we create a piece of watch culture for your wrist. Whether a completely authentic interpretation of the 1940s mechanical pilot watch, or a more moderised example, STOWA is a pilot watch manufacturer that ensures that you are in good hands, and delivers a piece of emotion and history to your wrist.