Schauer.
1990-2020.
30 years watches full of character.
There are currently no items in this category 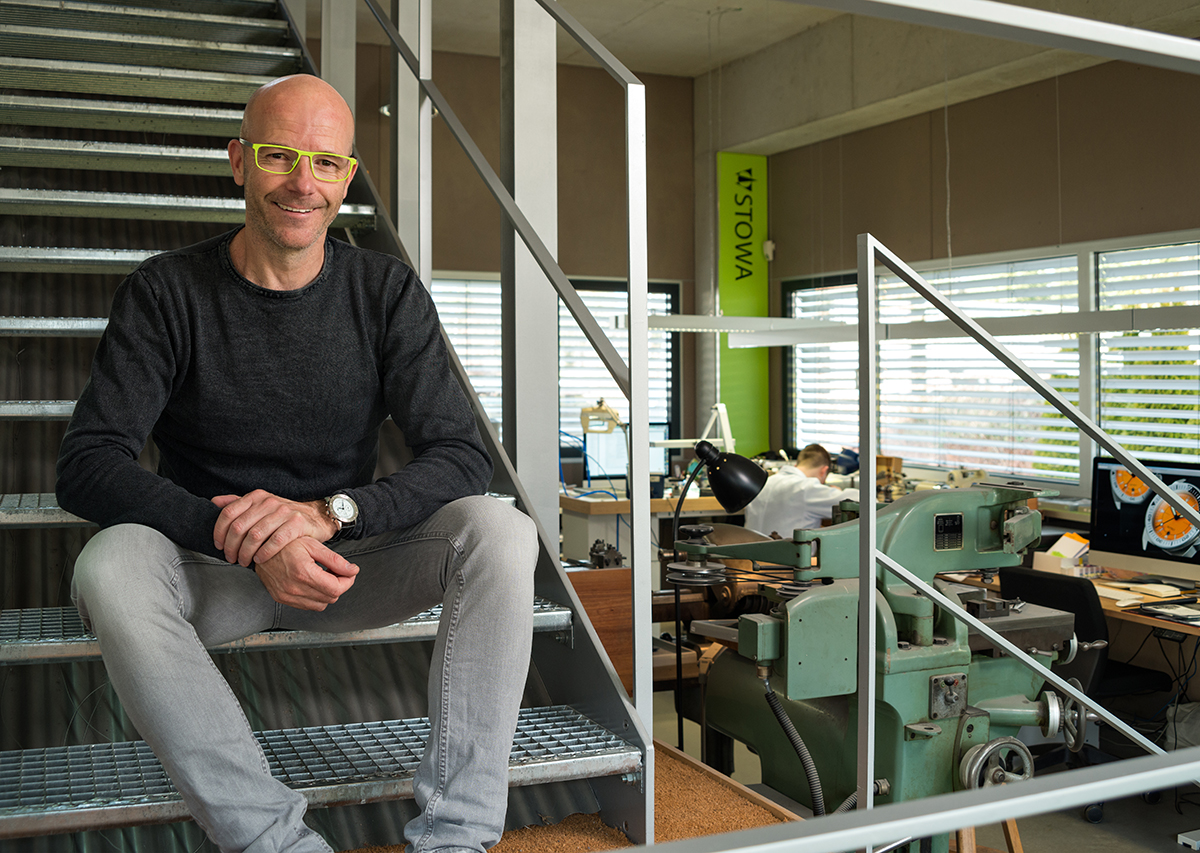 "We owe all progress to those who do not adapt."*

Since 1990, Jörg Schauer designs and produces his distinctive watches. Thereby, Schauer prefers stainless steel for the watch cases, high quality mechanical movements and a clean and unique design language.
His signature feature has become the 12-fold screwed bezel. Essential part is the technical screwing of all hand-finished Schauer watch cases. Among other things, this enables to restore mint condition even after years. Due to its perfect surfaces, precision and a design reduced to its essentials, Schauer watches are real collectibles for 30 years now. Many editions are sold out for years. As a result of the strong growth of brand STOWA during the past few years (Schauer bought the brand in 1996), he only was able to produce few of his distinctive watches. His personal expectations regarding best quality and perfect surfaces, which require absolutely focused working, were not compatible with the demands related to STOWA’s growth. He lacked time and tranquilness. But now, in 2020, the year of his 30th anniversary, Jörg Schauer wants to invest more time in his brand and the anniversary models.

In 1990, at the age of 22, Jörg Schauer decided to become self-employed. As professional goldsmith and specialist for handmade watch cases, he quickly gained a good reputation among collectors worldwide. More than 400 watch cases and unique pieces of highest quality were built in the first years, before he provided all his experience in his own collection. Since then, many special watches, often limited and/or with special displays, were built – for example the mechanical editions Digital 1 to Digital 3 and the chronograph QUARADA with chrono movement Valjoux 7753. Back then, in the year 2000, a true exception: uncompromising, square and waterproof. Schauer still builds this model (but you need time: 6-12 months delivery time). By now, the watch is a real Schauer-classic. Just in time for his 30th business year, Jörg Schauer wants to produce some of his watch editions more regularly again. Models like the typical chronograph Kulisse Edition 10 or also the Kleine Schauer shall become available again in a limited number for collectors worldwide. Schauer is only interested in actually realized concepts. The mere idea seems useless to him if it does not become reality. Jörg Schauer accepts and respects the fact that this often can be exhausting and not every single watch model of the last 30 years became a classic. For him, this is part of his philosophy he lives daily: to keep on designing, building, testing, even to fail with an idea sometimes but by this to undergo a steady creative process of thinking and learning. In 2020, Jörg Schauer is celebrating his 30th anniversary and he launches two new limited editions. 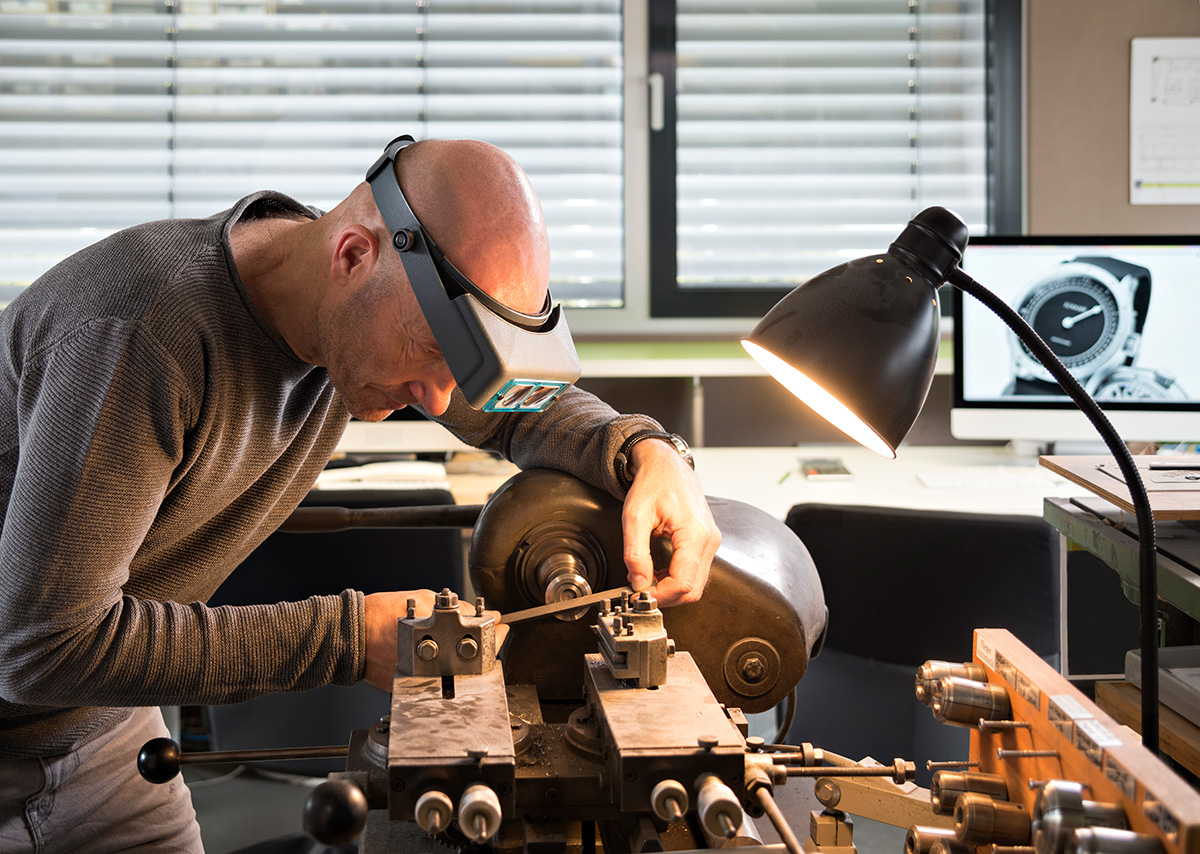 Jörg Schauer loves surfaces. Only after a stainless steel case got its typical Schauer-finishing, he is satisfied. Collectors appreciate this visible and noticeable quality. For a perfect matting, whether grounded or sanded, a lot of work is needed. However, the reward is a for the used metal typical, perfect look. 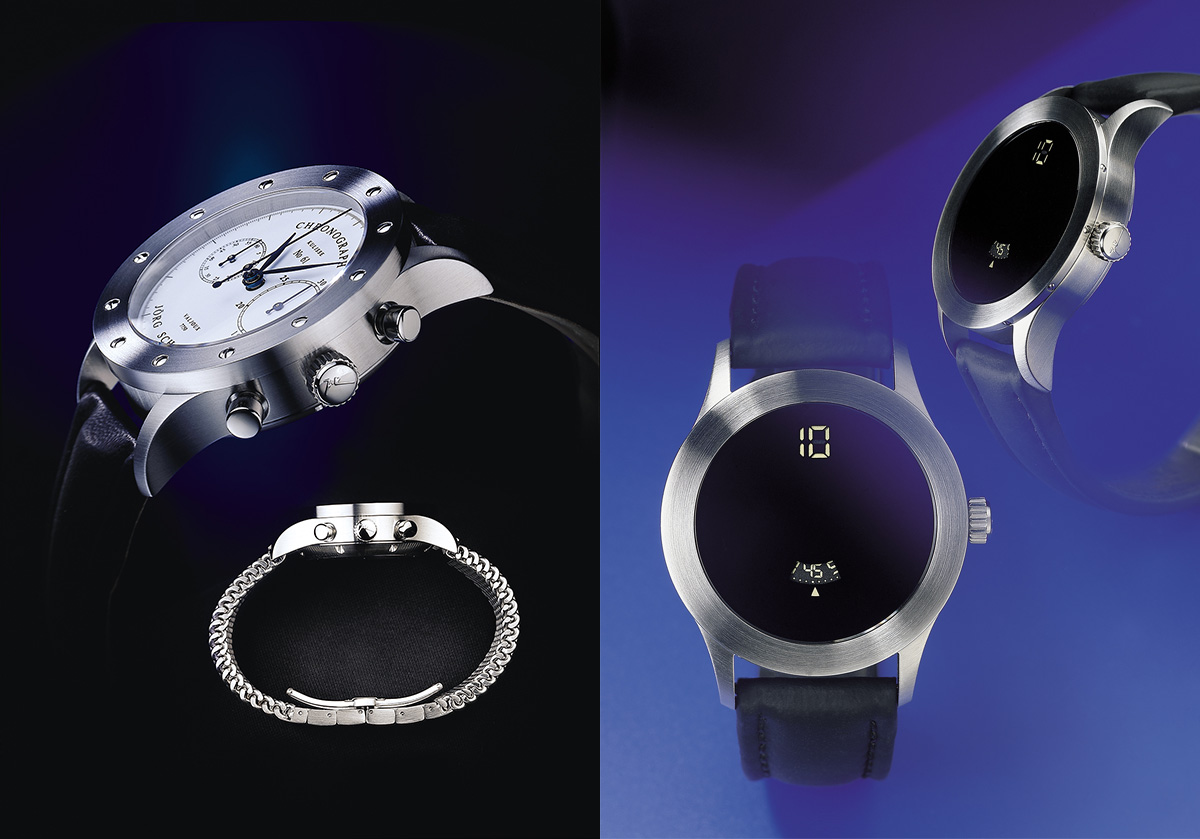 In the first years of his self-employment, Jörg Schauer built over 400 unique watches before he created his own watch with the characteristic 12-fold screwed bezel. Among these, there were very collectable movements like a minute repetition from Patek Philippe in a 750/000 rosegold case with guilloched 925/000 silver dial. Some of this watches are shown at the bottom of this page, more are following. 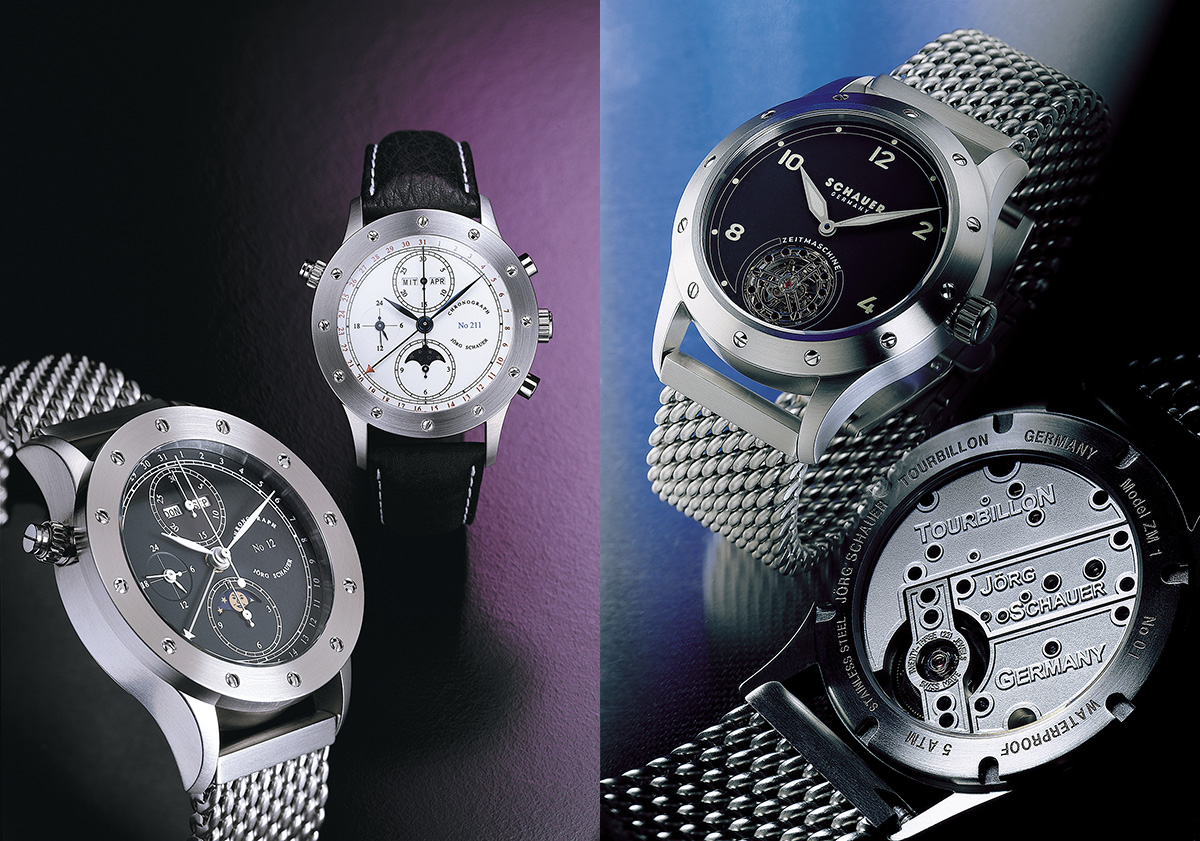 To ensure absolute exclusiveness, many Schauer watches are limited editions. There have been series limited to 10 or 50 items, but even a Schauer serial watch that hasn’t been produced 500 items of could be seen as very exclusive, considering the large amount of watches of each series produced by big watch brands. Illustration: Digital 1 watch of 1998. 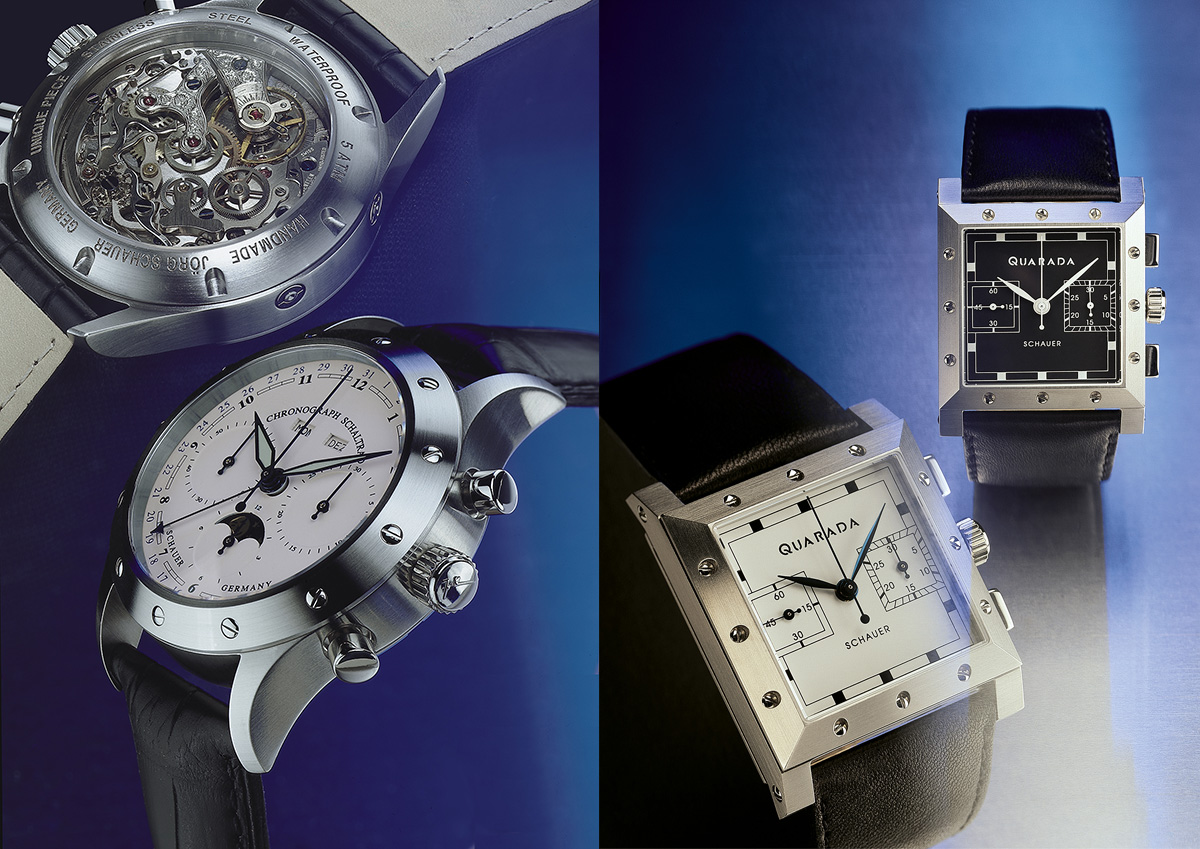 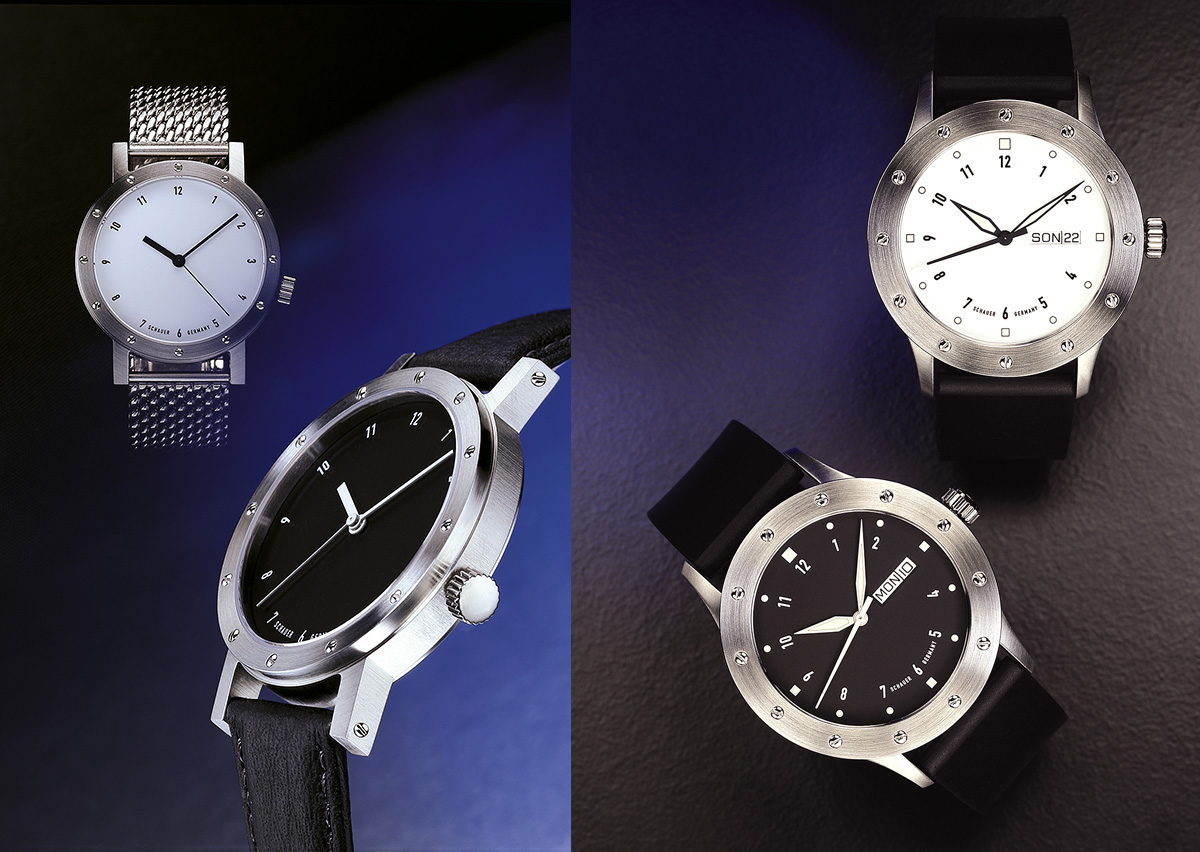 Schauer and STOWA offer modification of automatic chronograph movement Valjoux 7753 to manual wind. For this, STOWA produces a so-called chronograph bridge in-house which can be engraved individually, according to customer´s demands. This will contribute to the uniqueness of the movement which will emphasize the individuality of its wearer. The opportunities that arise from the individualization of a hand-wound bridge are diverse. Many personal engravings are possible: Whether it’s initials or data, we implement your idea perfectly. Challenge us with your own personal wish. 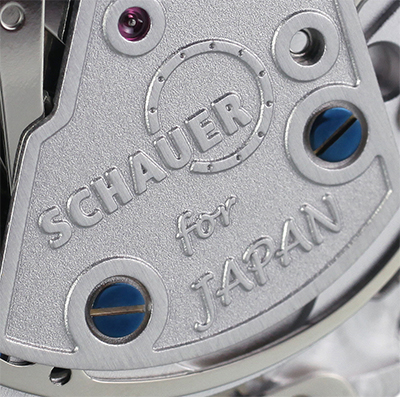 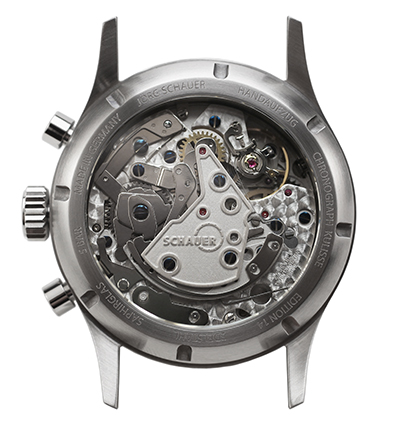 Our exclusive metal bracelet ARTUS was created to perfectly complement the distinctive Schauer watches. For Jörg Schauer, the relatively thin Milanaise braided bracelet, which was mostly made of gold, was produced for the first time in this enormous thickness of stainless steel. It is still something special today, even though other watch manufacturers have also discovered the elaborate bracelet in recent years. 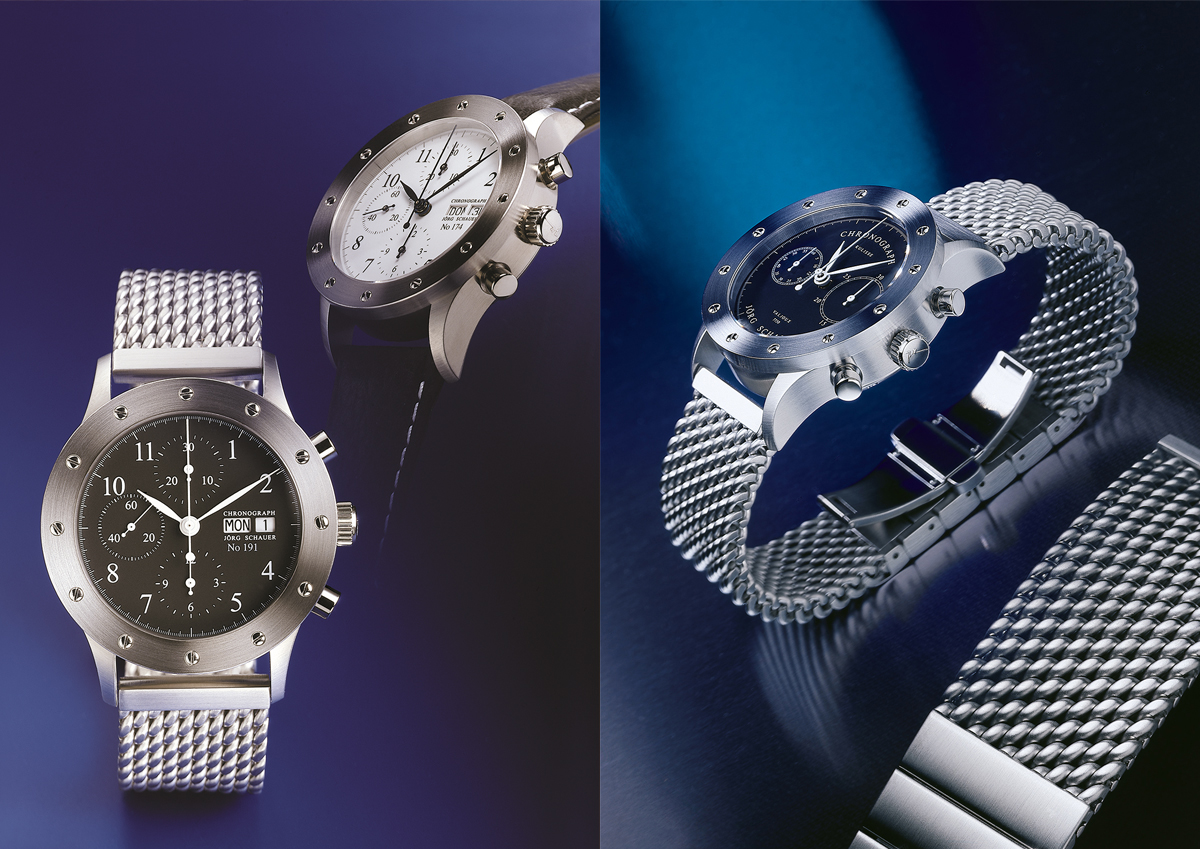 For the 30th anniversary Jörg Schauer now presents two of his classics. The Edition 10 date and the One-hand 42 limited. 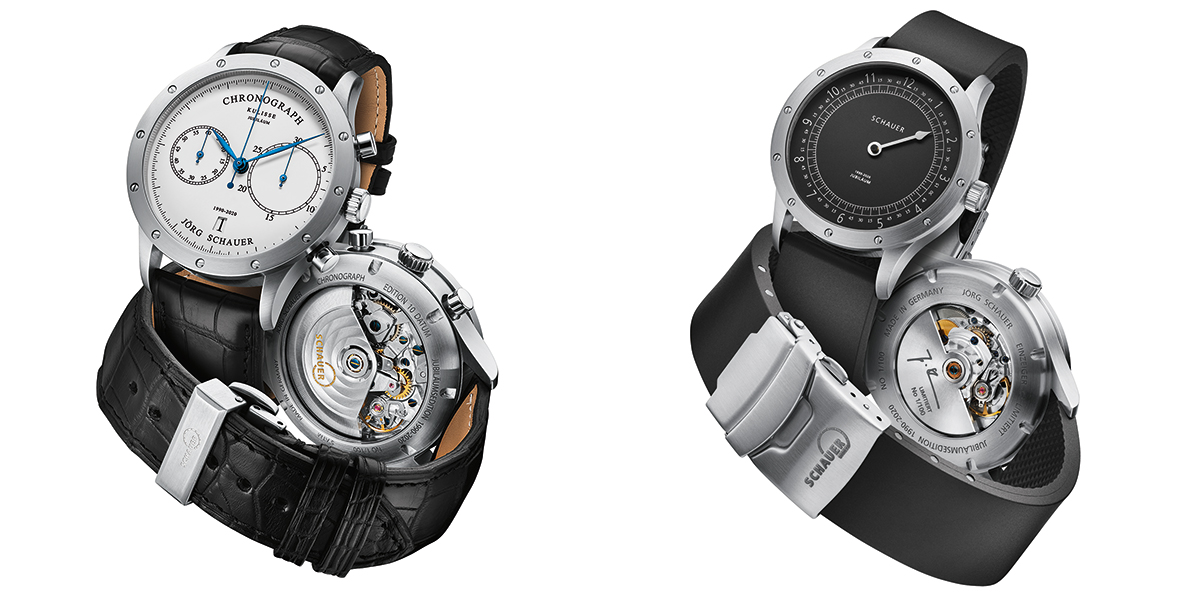 Here you can see a part of the Schauer chronograph collection that started with Edition 1 and has now arrived at Edition 15. 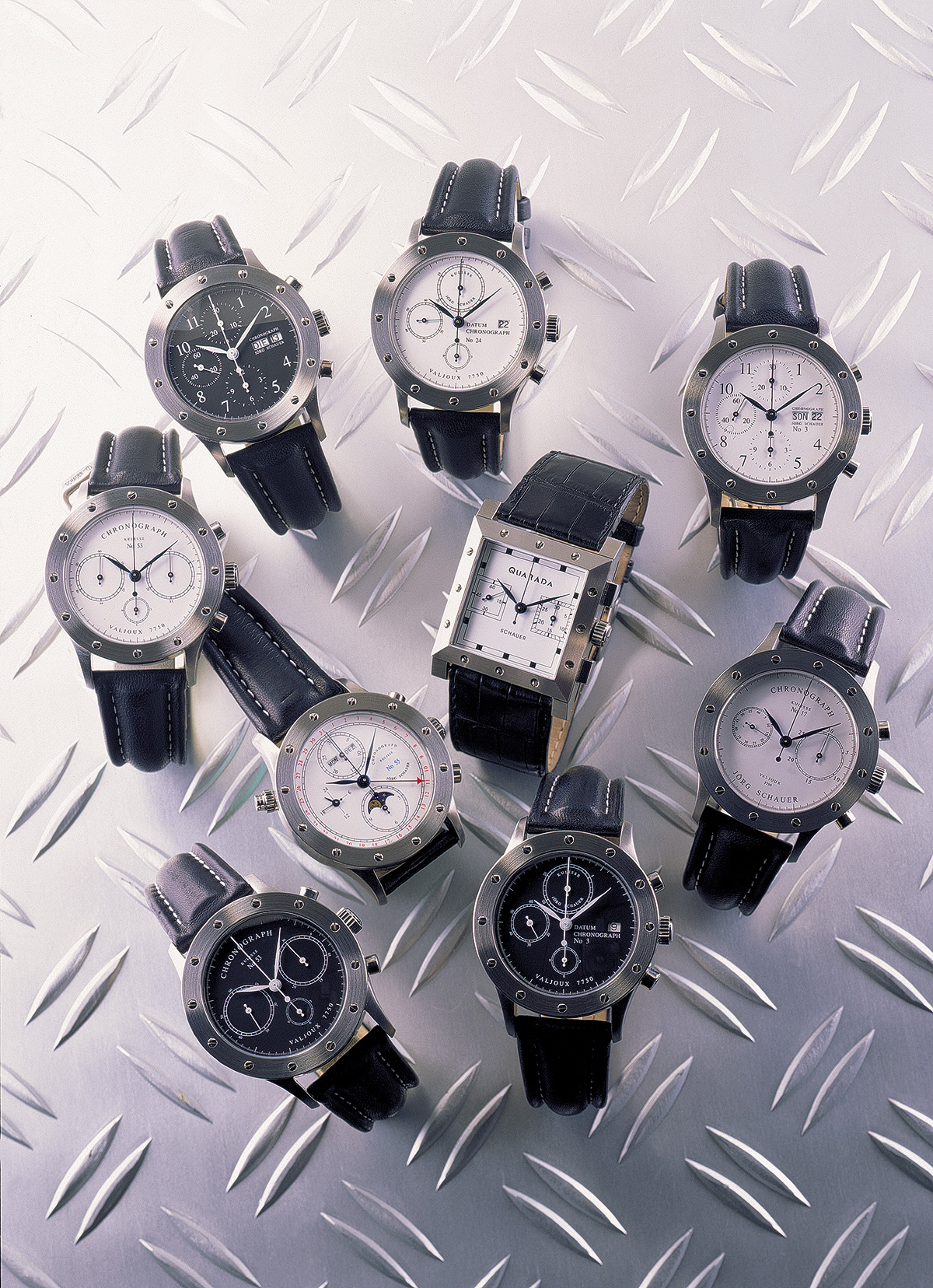 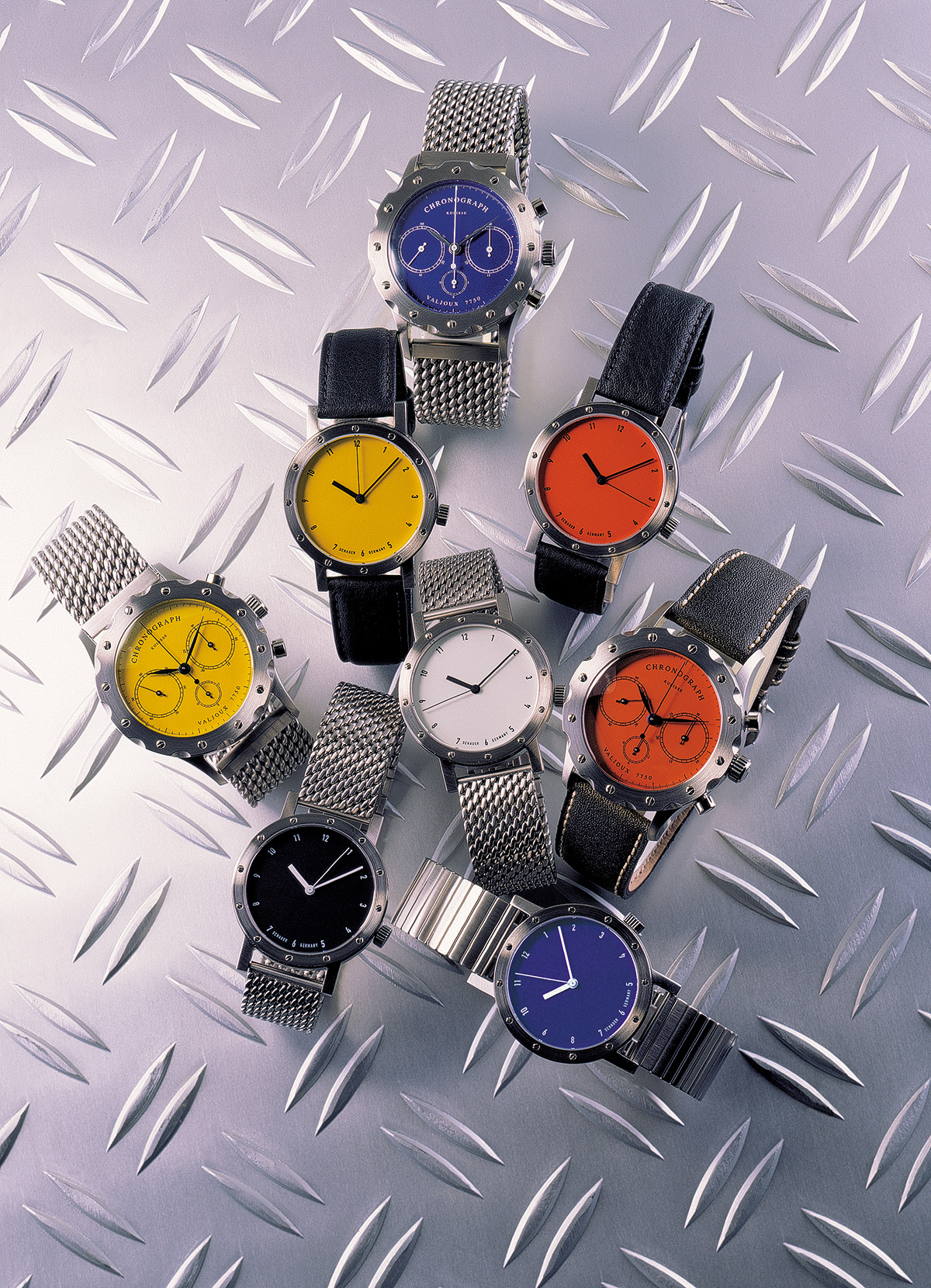 Here you can some unique pieces made by Jörg Schauer. In his first years he did more than 400 special pieces for worldwide collectors. Its a shame that the digital photography was not born - so he only have left a few pictures from this first years. 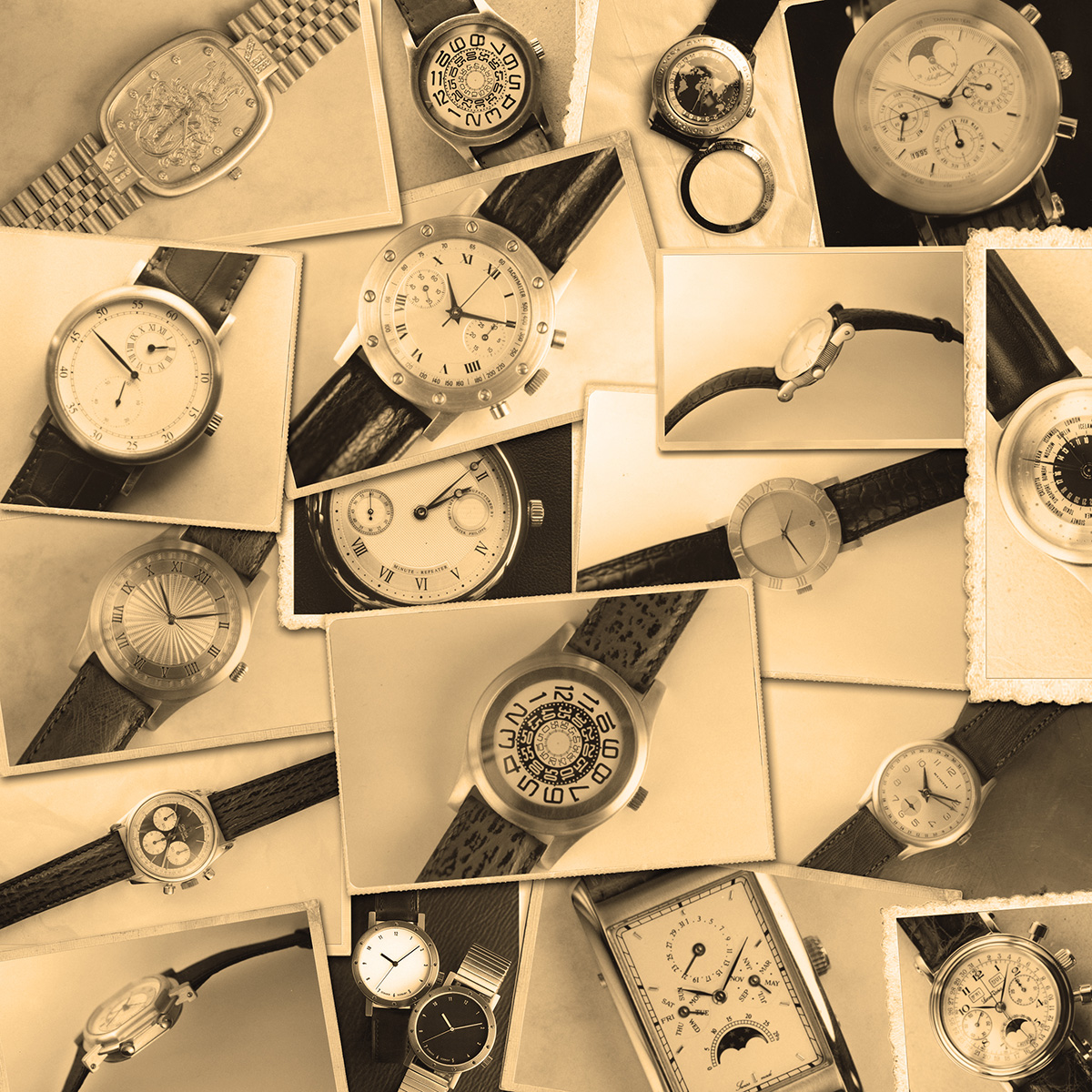